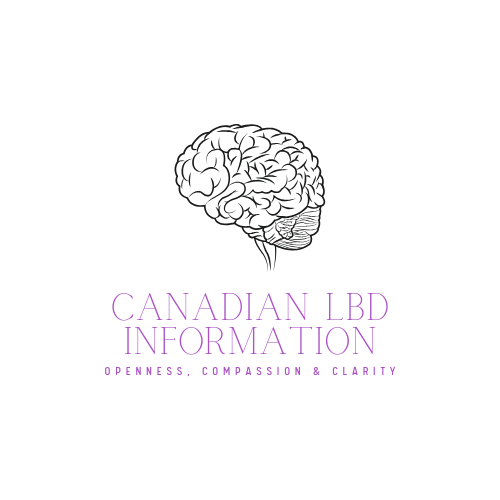 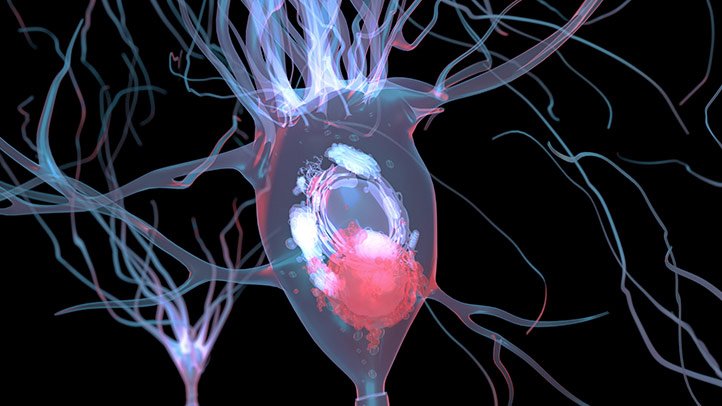 What is Lewy Body Dementia?

"Dementia is an umbrella term used to describe a set of symptoms affecting brain function that are caused by neurodegenerative and vascular diseases and injuries. It is characterized by a decline in cognitive abilities such as memory; awareness of person, place and time; language, basic maths skills; judgement and planning. Dementia can also affect mood and behaviour." - A Dementia Strategy For Canada: Together We Aspire

Lewy Body Dementia is a form of dementia that occurs due to abnormal deposits of a protein called alpha-synuclein inside the brain's nerve cells. These deposits are called "Lewy bodies", named after the scientist who first described them. The deposits interrupt the brain’s messages and affect the areas of the brain that involve thinking and movement. We do not yet know why or how these Lewy bodies form. LBD can occur by itself or together with Alzheimer's or Parkinson's and it accounts for 5-15% of all dementias. Unfortunately, there is currently not a lot known about the genetics of Lewy Body Dementia. With that being said, there are some newer studies that suggest up to 60% of the risk of getting the disease is genetically predetermined.​

​As of right now, there is no cure and LBD is fatal. Between 10-15 percent of all patients with dementia have Lewy Body Dementia. Though Lewy Body Dementia is the second most common form of dementia, it is the least well known. One of the major issues that people diagnosed with LBD and those in the medical field face is that the diagnosis can only be confirmed through an autopsy after death. This is one of the leading reasons why this type of dementia has been such a mystery to the medical world until recently and why more research is desperately needed.

All of the information on this site has been vetted by Dr. Stephen Pasternak the Director of Cognitive Neurology and Alzheimer's Disease Research Centre at Robarts Research Institute, Western University. 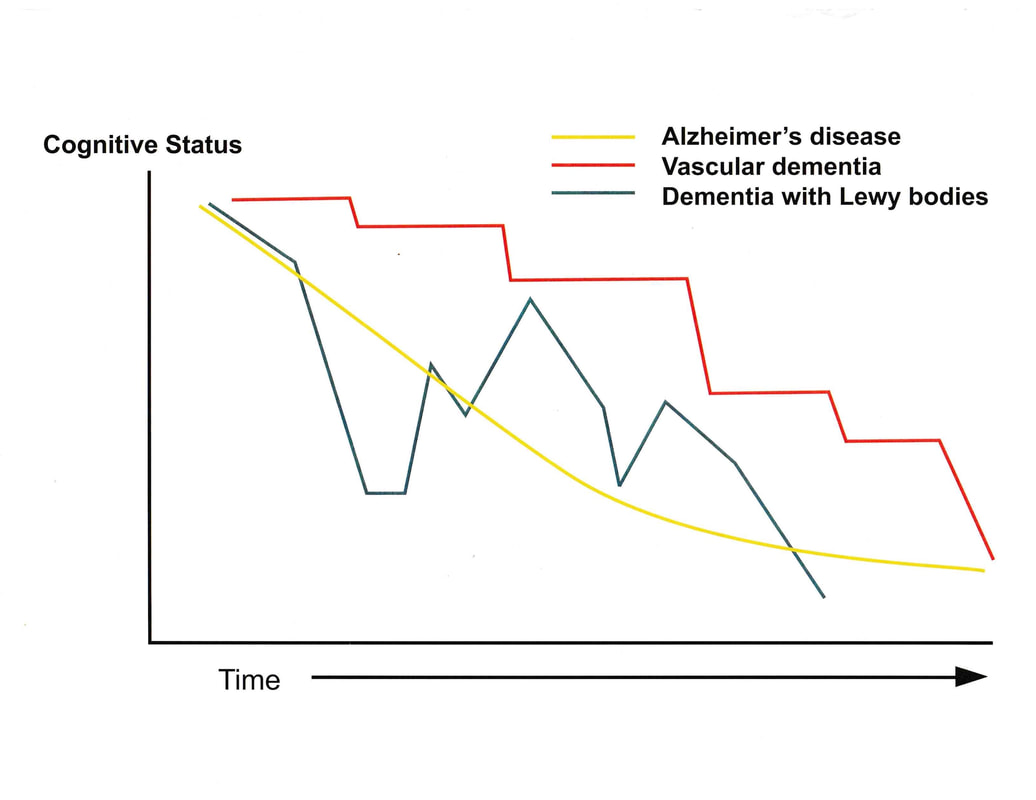 "Lewy Body Dementia is a progressive disease, meaning symptoms start slowly and worsen over time. The disease lasts an average of 5 to 8 years from the time of diagnosis to death, but the time span can range from 2 to 20 years. How quickly symptoms develop and change varies greatly from person to person, depending on overall health, age, and severity of symptoms.

In the early stages of Lewy Body Dementia, symptoms can be mild, and people can function fairly normally. As the disease advances, people with LBD require more help due to a decline in thinking and movement abilities. In the later stages of the disease, they often depend entirely on others for assistance and care.

Some Lewy Body Dementia symptoms may respond to treatment for a period of time. Currently, there is no cure for the disease. Research is improving our understanding of this challenging condition, and advances in science may one day lead to better diagnosis, improved care, and new treatments."

Furthermore, Dr. Pasternak elaborates on a question asked about the relationship between Parkinsons and LBD in a letter to our founder, saying:

"Yes, these things are not clean cut.

Parkinson’s patients can develop dementia. About 50% of them do this after ten years of the disease. 80% at twenty years. Some of them develop the exact same cognitive problems as LBD patients.

The main research criteria say that when you have cognitive problems before, or within one year of developing Parkinsonism (stiffness, tremor, etc), you have Lewy Body Dementia. If you develop dementia after one year, then they call it Parkinson’s disease dementia.

Not everyone agrees. Some Parkinson’s specialists will tell patients with Parkinson’s disease, when they develop cognitive impairment and especially hallucinations, that they “have developed Lewy Body Dementia."

With neurology, we are not able to examine the brains of people who are still alive, so it is hard to really know what is true. I think the one year rule seems reasonable, though I don’t know if the one year rule really does separate LBD and Parkinson’s into two diseases. The alternative is that Parkinsonism and cognitive impairment is really one disease and you can have different problems depending on where the Lewy bodies develop in the brain.

As an example, we use the word “stroke” to define a disease, but stroke patients can be very different depending upon where in the brain they have the stroke."
Video provided by Osmosis, a company dedicated to help medical students and doctors. Check out their other short medical information videos on their website - https://www.osmosis.org/

What are the symptoms and signs of LBD?

The Mayo Clinic describes LBD and it's symptoms as:

Lewy Body Dementia causes a progressive decline in mental (cognitive) abilities. People with Lewy Body Dementia may experience visual hallucinations and changes in alertness and attention although it is important to note that you can’t diagnose LBD without the cognitive problems. Lots of people hallucinate for other reasons so that is not the only thing to expect. Parkinsonian signs, i.e. similar to Parkinson’s disease, such as rigid muscles, slow movement and tremors also present themselves in those with LBD.

Furthermore, The Mayo Clinic states that Lewy Body Dementia signs and symptoms may include:
​ ​
(https://www.mayoclinic.org/diseases-conditions/lewy-body-dementia/symptoms-causes/syc-20352025)

What are the treatment options?

"At present, there is no cure for LBD. It is sometimes possible to use medications to treat symptoms such as those associated with Parkinson’s disease, depression, and unpleasant hallucinations. Cholinesterase inhibitors are medications used in treating Alzheimer’s disease. They can improve alertness and cognition in some people and may reduce hallucinations and other distressing symptoms. However, due to the multiple features of LBD and Parkinson’s disease symptoms, treatment of one symptom may be achieved by worsening another. One strategy to avoid or prevent this is to treat symptoms in order of their severity.

Behavioural therapeutic strategies are also helping people living with the disease. Therapeutic techniques like physical activity and music are being used as viable and useful treatments. Research shows that the quality of life of people with dementia and of their caregivers, is significantly improved by activities that emphasize their strengths and abilities. By understanding the person’s personality, life experiences, support systems and ways of coping, a person-centred approach to care can be created that preserves and improves quality of life."

A note from Dr. Pasternak:

"Although Cholinesterase inhibitors were originally developed to treat Alzheimer’s disease, they actually seem better for LBD than for Alzheimer’s disease."
Medical disclaimer:  Canadian Lewy Body Information does not provide medical advice. The content available on this website does not provide a diagnosis. The information herein is not a substitute for the professional judgment of a healthcare professional. The determination of the need for medical services and the types of healthcare to be provided to a patient are decisions that should be made only by a physician or other licensed health care provider. Always seek the advice of a physician or other qualified healthcare provider with any questions you have regarding a medical condition.