A year after Bob's passing, we gather here to remember and pay our respects to a wonderful father, son, grandfather, husband, teacher, athlete and all around amazing human being. We will continue to advocate and raise funds for LBD research in his name and memory. He is dearly loved and sorely missed by so many. 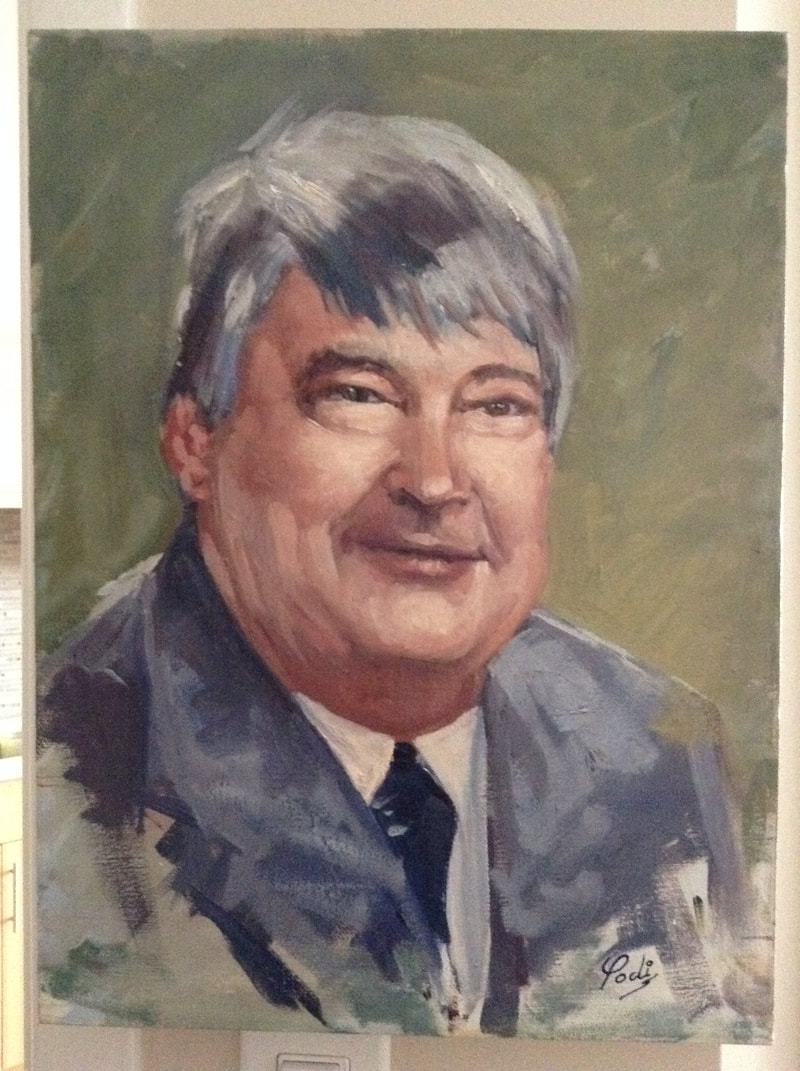 “Give it your all and do your best.
Don't give up.
Give it a try and see what you think.
Be gracious in defeat and humble in victory.
Above all have fun.

Words often heard on the ball diamond, hockey rink, soccer pitch and football field.
Words I heard from my dad growing up.  Often.
Words I try to live by.
Words I say to my kids.  Often.
Sportsmanship doesn't apply just to sports. It is life.

My dad taught me that through coaching my teams, watching me play and playing sports himself that I went out to watch. He wasn't always on the winning team, but he handled defeat with a congratulations for the other guys. Winning came with a brief celebration and a hearty handshake for the other team. And whether it was a win or a loss, he had fun and enjoyed playing the game. Sports creep into life. How you handle yourself on the ice or the field helps to shape how things go in your daily life.  As the lessons and their teacher help to shape you into what you are in life.

Now, I am the one who tells the kids that what is most important is having fun and giving 100%. I am the one coaching the team and focusing on fair play and fun over winning.

​You don't always realize the lessons you are learning as a kid but as an adult, you realize them and appreciate them and respect the people who taught those lessons.  And above all, you strive to emulate those who taught you, to share that with your kids and the world. You hope that you will affect them as you were affected at their age.

Lessons on the field. Lessons in life.

“When we think of Dad, we remember his even keeled nature in the way he did things. The courage, charisma and humour he exuded through out his life. And of course the love and loyalty he had for friends and family. Miss you Dad.” - Mike Schmidt (Son)

"My dad was definitely a one of a kind. He sure did live a great life. He's the only one I could travel with when we were kids and he knew someone everywhere we went, including Disney World in Florida AND at truck stops along the way there. I miss him dearly. He was was always there for me when I needed him and always had a friendly ear to share when I needed it. He was full of great advice too, although it wasn't until later in life that I actually listened to that advice. He was so patient with us, especially the grandkids when helping them with something or teaching something new (like teaching my son, Jordan,  the importance of that backboard in basketball). Miss you pops!!! I hope you're enjoying your time on the links. xoxo" - Jen Schmidt (Daughter)

“I've seen for myself how a Husband lives up to his commitment to his wife thanks to growing up with Bob as a Stepfather.  When I think of Bob, when I remember him, what comes to mind the most was how happy he could make my Mother. I'm grateful that I got to watch as they grew older & more comfortable with each other, watching how they inspired the best of each other in public & in private. I'm grateful for Bob for showing me how to be a Gold-Standard Husband, & grateful for showing me by example at almost every opportunity. One after the other. Rest in Peace, Bob.” - Morgan Beare (Stepson)

"To many, he was Robert, Bob, Teacher, Principal, or dad. But to me, he was Grandpa Bob. No matter what his title was to you personally, his character was steady throughout all of his relationships. He was a teacher to everybody he reached. He taught us how to be humble. He taught us what true patience and unconditional love looks like. And he showed us how much more important loving your people is than any prestigious title you could be given.

If you asked him what his title was, he wouldn’t have stated one of his many credentials or honorary award names. He would say that he was a loving husband, a patient father, a giving grandfather, and a loyal friend. Now, this isn’t to say that he wasn’t inspiring with his countless honors. He is who supported all of us grandchildren into chasing post-secondary educations, no matter what type of education that may be. He led the way in athletics for this family and has inspired many of us to take sports to the varsity, provincial and national stages. His legacy lives on in everything we do.

But I hope, and I know that he too would hope, that his legacy of humbleness, kindness, and patience is the legacy that his children, grandchildren, great-grandchildren, and generations to come will continue. I will miss grandpa Bob forever, and I selfishly wish he could still be here to continue to guide us in his footsteps. But I know that he has finished his battle with Lewy Body Dementia and I am happy he is done with those pains. I believe that although he has physically left us, he will continue to be with us in the highest and lowest times in life – to grace us with his traits that we need to move forward: humbleness, patience, and unconditional love." - Brodie Schmidt (Granddaughter)

“Bob Schmidt was my cousin, Carol's husband, so he was my cousin-in-law, but we did not meet until the early 2000s. My first impression was of a gentle, easy-going man already into retirement. He and Carol visited us in Arizona when he was still healthy and I was a brand-new golfer. It can be frustrating for a good golfer to put up with a newbie like me, but Bob was extremely patient and encouraging. And a couple of years later, he commented on how much I had improved, giving credit where credit was due. He was a strong support for his wife, although he typically remained in the background and let her lead the social interaction. Being around Bob was comfortable. He had no hidden agenda or need to prove himself. He loved children, and I can well believe he was a marvellous teacher and school principal. Bob's illness and death is a great loss to his family, but his life was a legacy of caring and leading.”  - Annie Griffin

“Bob was a kind, laid back and cheerful guy. He was great traveller on our bus trip to Chicago. Happy days.” - Doreen Henderson

“Kind, considerate , sweet… as only a gentle giant can be.” - Marion Richardson

"On this one year anniversary of Bob's death, I can so easily bring to my mind's eye Bob's gentle and warm smile, and hear his soft spoken voice. My memory of him lifts my heart in a small yet powerful way, and I'm reminded how Bob's life has so positively influenced the world around him. Rest in peace Bob. Your spirit journeys with us in our hearts." - Rev. David Malina

“There are too many good things about Bob as an educator, son, father, husband, and friend to comment on them all. I will leave it to others to give the well-deserved accolades in those areas of his life. Someone once described Bob as the world’s biggest Teddy Bear. This was a great compliment, and to me, it highlighted Bob’s best feature. While he was somewhat imposing in stature, Bob was pleasant, warm, welcoming, jovial ... the list goes on. It was easy to feel comfortable when you were with Bob – I cannot remember him being angry. Even when he was faced with problems in his life, he did not let them change his demeanor. Being with Bob always made it easy to feel relaxed and at ease. There is not enough of that in the world these days. We all miss him. We miss him a lot.” - Tom Rajnovich

“Bob was a very special person.  He was such a giving person, always there if someone needed help.  The countless hours he gave to christ church,  plus other people and the k-w area that he gave so much, time and energy.  The potato drive every year, for the food bank is it just one of the things he was involved with.” - Ken Schade

“I have known Bob since he and my then teaching partner Carol got married in 1982. He has always been a very caring, personable and steadfast person who evoked positivity and respect from everyone he came in contact with. He left a big footprint in his community and will be forever missed and never replaced.” - Ilsedore Kautsky

“In 2005, my cousin Carol invited me to stay with her and Bob on a trip from BC to Ontario. I had the pleasure meeting Bob in person. Bob impressed me with his warm, energetic personality, his love of family and commitment to his church and community. He opened my eyes to the history of his city, its geography and the people who settled the area. I regret I was not able to visit again.” - Christa de Beaupré

“I have known Carol and Bob since I moved to Canada in 2000. I did a portrait of Carol after which she asked me to paint Bob.
We arranged a sitting. This larger than life gentleman sat for an hour without moving (what artists only wish). I wondered what his past students would have thought about this giant of a man. But despite his outward appearance I found him to be a kind and generous man with always a good word to say and a smile on his face. May he rest in peace in his new environment.” - Podi Lawrence

"I have fond memories of golfing with Bob. Whenever we went golfing, Bob seemed to know everyone at the course. People would go out of their way to come over and chat with Bob. He remembered everyone's name and had such a natural ability to relate to each person. Bob played golf like he played life. He had such an easy swing, but with a strength that pushed the ball forward. It really reflected his daily life - a gentle giant, we such a relaxed demeanour, but an inner strength. He never got frazzled by a difficult hole. If his ball did not land on the fairway, he did not get upset. He just hit it again from the rough and moved on. Even as the LBD started, Bob seemed to maintain his composure. His health took him off the fairway, but he continued to do life as best he could from the rough. I hope that there will be golf in heaven. Because I would like to play some more rounds with my dear friend Bob." - Henry Zech
Leave your own tribute or memory below: